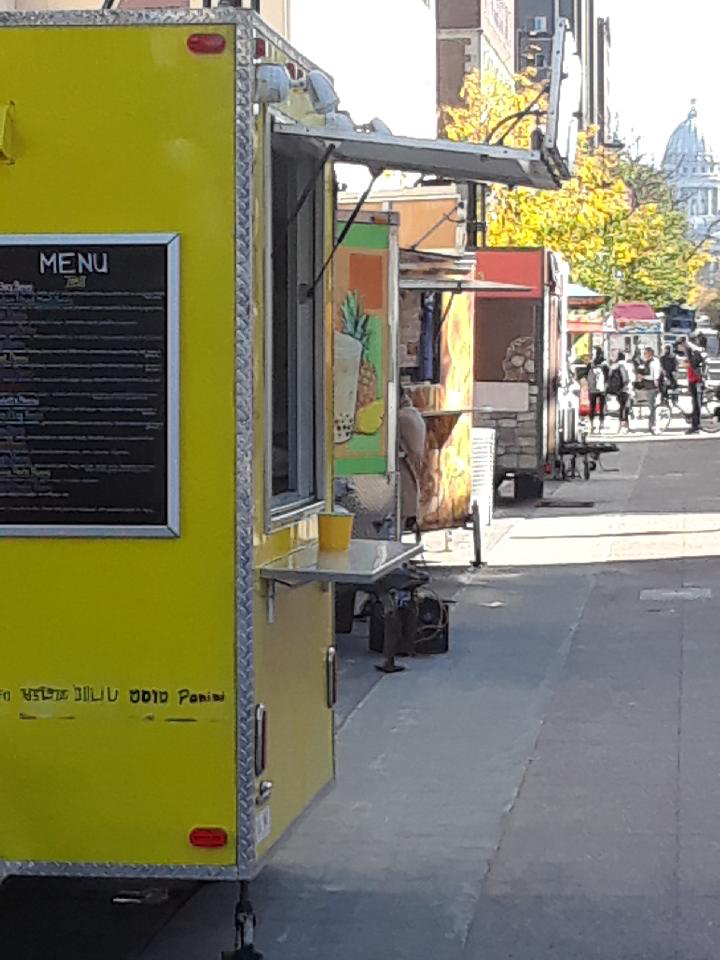 Food trucks have become a frequent often colorful sight not only in the biggest of cities but in medium sized cities as well, especially near places like college campuses. They are a great way for solo diners to expand our horizons at low cost and try specialty flavors that could become favorites.

Food trucks grew out of the long tradition of street vendors hawking food to tourists and commuters on the run. It’s a way for someone who believes they have a winning food idea to try it out without the daunting funds needed to open a restaurant. Food trucks are often a way for budding food entrepreneurs to build a customer base for a possible future restaurant or to expand the reach and visibility of their restaurant.

Because of the obviously limited space in a food truck, the menu will be limited to a few items that can be served quickly. An upside for us eaters is that the specialties need to shine in what is often a very competitive food truck market.

Food truck offerings are generally quite inexpensive so it’s a good way to try flavors you haven’t had before. If it turns out, you are not a fan of Korean barbeque; you’ve only invested $5-10 instead of   the double or triple amount you may have to spend at a restaurant.

They will often feature ethnic specialties and immigrant foods that you might not yet find in a full-fledged restaurant. The Library Mall on the University of Wisconsin campus here in Madison, WI can be lined with up to 20 food trucks offering everything from Korean bulgogi tacos to Afghani kebobs, to Thai noodles to Jamaican jerk chicken and rice. One of my favorites makes Venezuelan empanadas, pastry pockets, filled with plantains, black beans and garlic and topped with cilantro salsa.

Food trucks are licensed and inspected by Health Departments just like restaurants. Even though they are compact, they must comply with the standards of food safety and sanitation.

Not only can you grab a quick lunch or snack but consider grabbing a meal for later that evening when you know you are going to be working a long day and likely won’t be preparing much at home. If you purchase something you plan to eat later in the day, ask for the dressing on the side of the salad or the mayo on the side of the sandwich so it will keep better.

You can do a web search for the food trucks and their locations and hours in your area.  They will often be at a specific location, often during the busy lunch hour, sometimes on specific days of the week. Food truck menus are often reviewed on apps like Yelp. As with any reviews online, don’t over-rely on them. They are often full of people who over complain and stacked with friends who might over compliment, but they are a good starting point.

After you find one or several food trucks that have menus you enjoy, sign up for their Instagram or Facebook page. They will often post their special menus or special events where they will be selling. Often, neighborhood fairs and art or music festivals will have rows of food carts as the featured vendors. You will also be the first to know when you have helped that exciting new food take the next step in expanding their business and their menus.

From Blossom To Plate

Made in Wisco by Dirigible